To the Bat Cluster! Setting Up Enterprise Linux for ARM 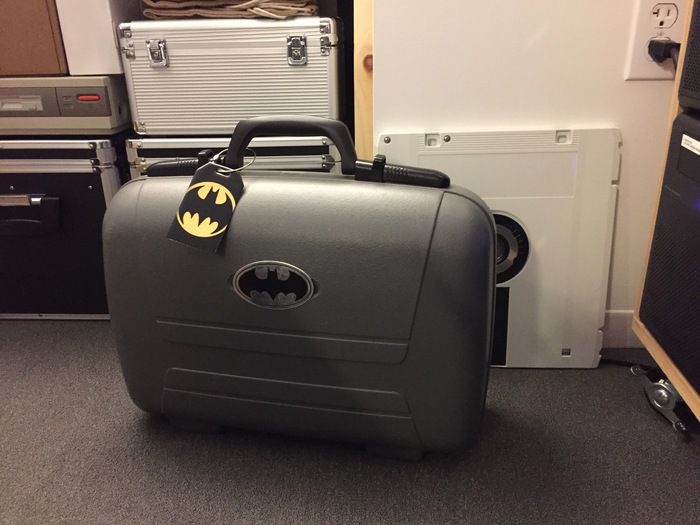 The Dragon Propulsion Laboratory examined in depth the excellent X-Gene ARM chips that were an early entrant on the ARM 64-bit scene and enabled so much of the software-side Linux OS development on ARMv8. More recently, we built a custom cluster in cooperation with Wayne Enterprises that we affectionately refer to as our “Bat Cluster”. In this third blog, we are moving back to the software side of the equation, setting up Red Hat Enterprise Linux on the Bat Cluster itself.

Red Hat Enterprise Linux introduced full support for 64-bit ARM with release 7.4 in November of 2017, and while there are many flavors of Linux on ARM, only something as robust and secure as RHEL would do for a sophisticated user like Wayne Enterprises!

The most commonplace strategy for board bring-up on ARM development boards is to use a PXE server to deliver boot images to the board over the network, even for install purposes. While that is a very suitable process for development shops, setting up dedicated DHCP server is somewhat unwieldy for personal use. We chose to perform a local install instead without requiring network support. As the Mustang board is headless and does not have any video interface, this is somewhat different from the RHEL install process we are all used to.

We are reserving the SATA interfaces for bulk storage use, ideally with Ceph — but that’s another blog. That leaves the SD Card (properly the Serial Digital Interface) and USB ports as our best alternatives to boot the board all the way to Linux user space. Both SD and USB interfaces are fully supported by U-Boot, but we did not fathom a satisfactory way to boot from SD card within the depths of the latest UEFI firmware. 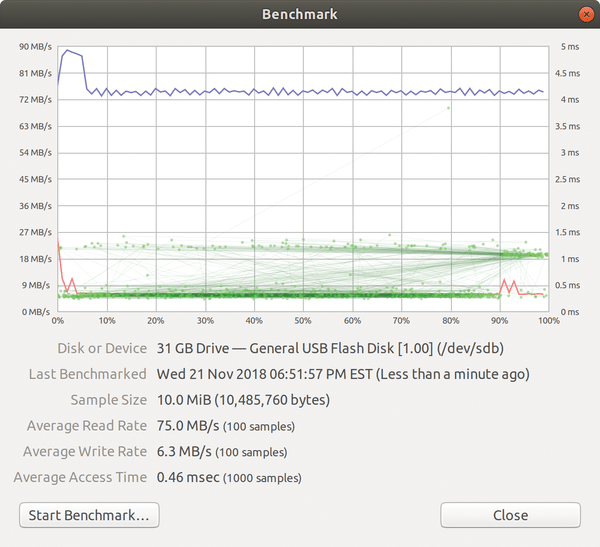 We also had a fascinating adventure discovering that USB 3.1 storage media can actually underperform older USB 2 storage with better garbage collection implementations. As operating system boot generates a burst of write activity on account of logs, this can actually lead to device timeouts. We discarded some cheaper, unbranded USB keys and replaced them with a trusty old standby, the same SanDisk Cruzer Fit USB keys that were once selected as the internal boot media of the first generation Ubuntu Orange Box.

Back to The Bat Lab #

We started by downloading the Enterprise Linux ISO images for ARM 64 from Red Hat’s content distribution network (a developer subscription may be required for access). 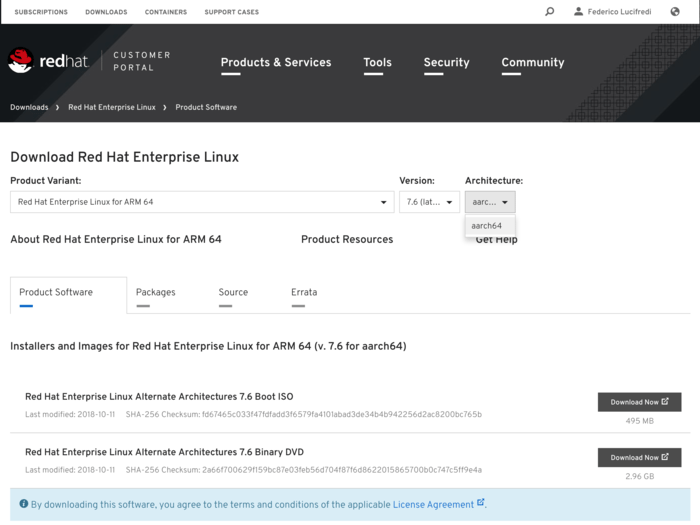 We laid out the install setup as we did back in 2015, except that we have finally upgraded our USB-to-SATA cable to USB 3. Our plan is to boot from a temporary SATA SSD device (a 120GB Samsung 750 EVO we had laying around), as it is very easy to boot these boards from the SATA interface, and install from here on to our permanent USB boot drives (the ever reliable SanDisk Cruze drives I mentioned earlier). 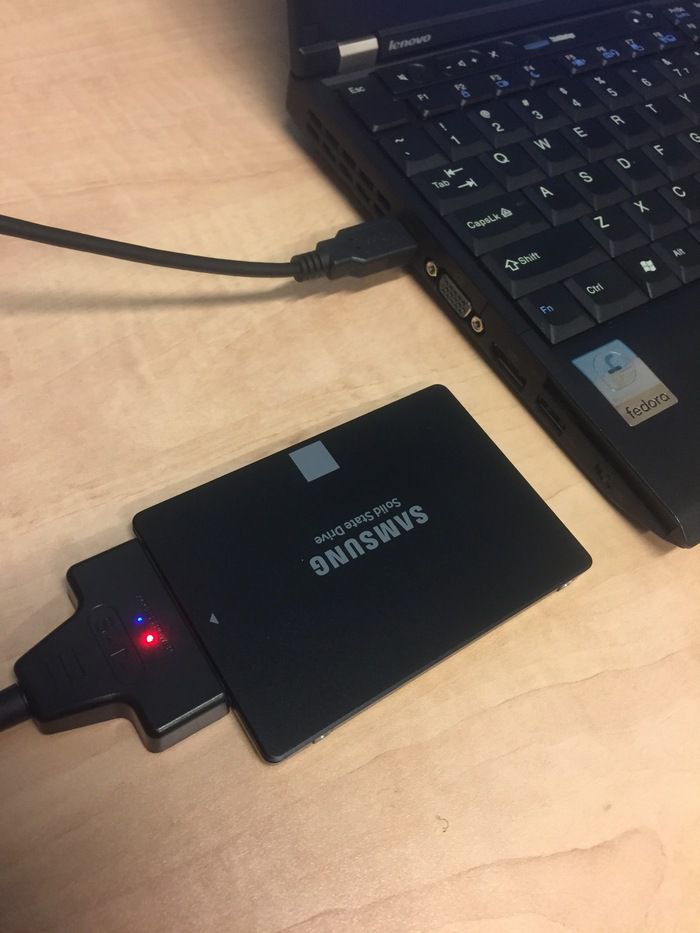 dd to the Rescue #

We keep things easy and lay down a single partition, mostly because we want a clean GPT partition table on the drive to start with. disks comes in handy for this purpose as usual. We then image the whole drive with the bootable ISO we just downloaded: 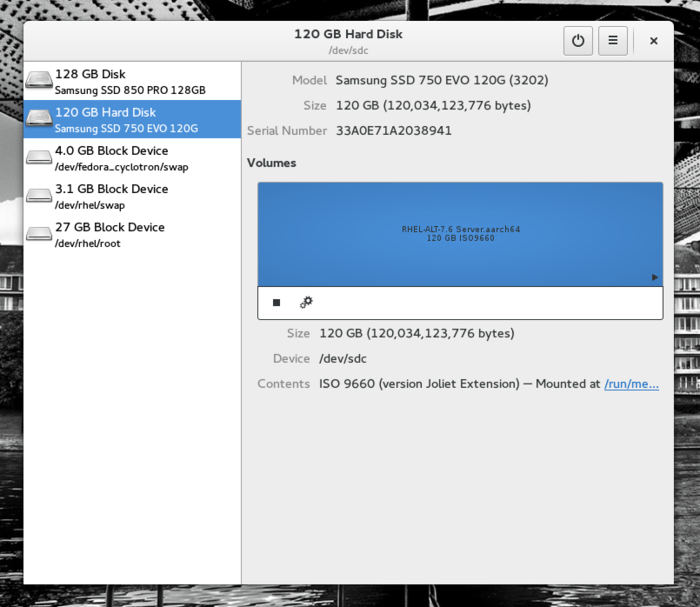 With our newly prepared disk, we are ready to install RHEL directly on the boot USB drives we are setting up for each Mustang board. We are designating our bootable drives as USB FS0:\, which maps to the top USB port on the board’s IO stack. The rest of the board bringup setup involves just configuring the Serial-to-USB cable by connecting to UART0, which is the bottom serial port.

The first screen offers to boot from install media or, alternatively, to verify the install media before booting. Our serial terminal is running on a Fedora system, in case you wonder about the background art.

In deference to Murphy’s Law, we recommend you choose to verify the install medium on its first use and not tempt fate.

Once the Installer drive boots, we minimally need to carry out these three steps to install a working RHEL 7.6 system: 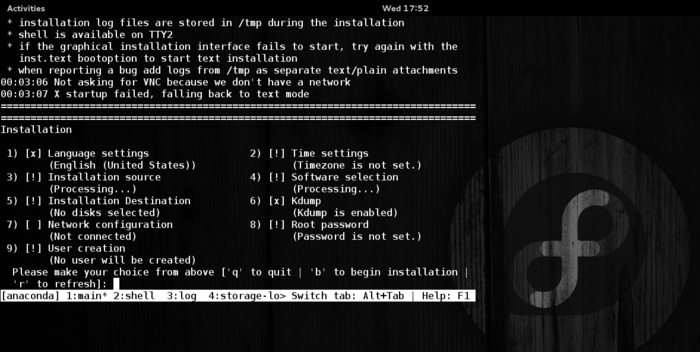 We chose the US-EST timezone as we are doing this build at our Westford engineering HQ, and no, our password is not “password”. To save ourselves the need to set up further configuration later, we also configured the following:

If the installer requires it after these steps you may have to confirm the software selection once more (4, 1). Hit b to proceed and start installing. 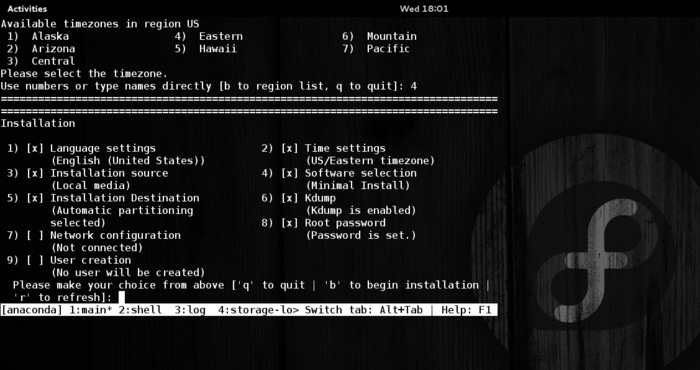 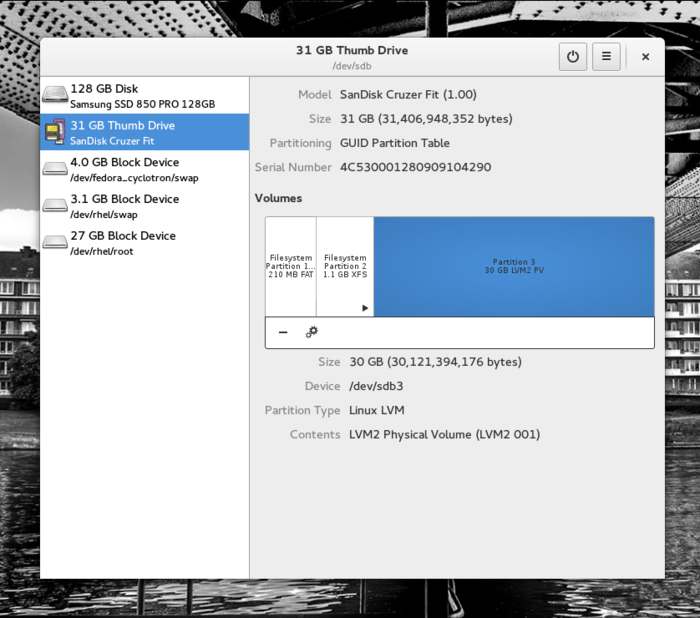 Our install resulted in the bootable partition layout above. After rebooting, we keep tapping the escape key in our screen serial connection until we are prompted with the UEFI setup utility. 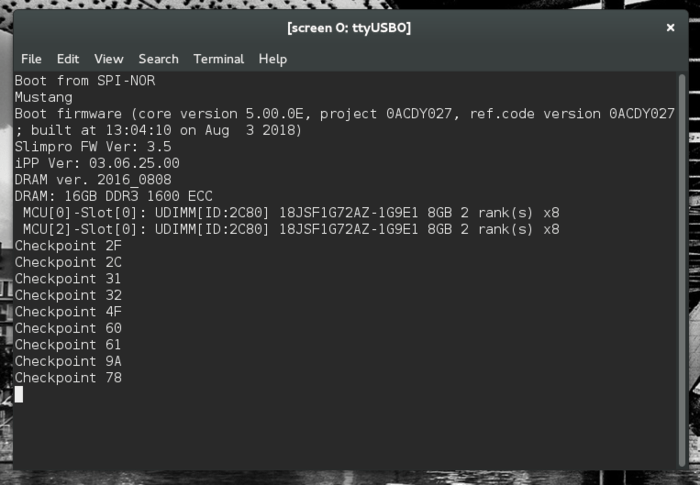 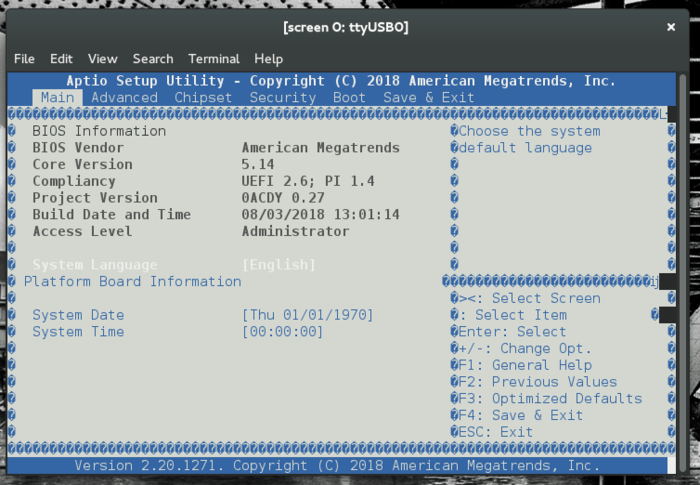 The boot configuration may happen to be right, there is nothing in the Fourth Law of Thermodynamics to prevent it. Yet again, it may not be, so we check. The boot order should list our SanDisk USB key as the first boot option in the boot menu. 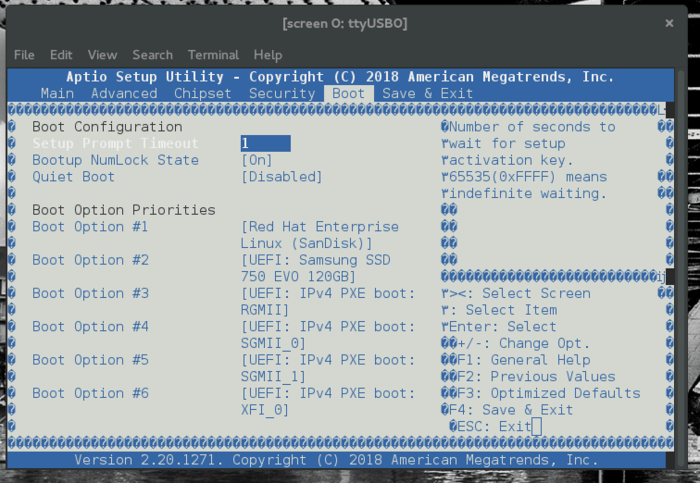 We are ready to reboot again, but not before we set up wired network connections for each of our boards. We chose to configure the eth1 network interface amongst the four this board has available. The corresponding port is found at the base of the dual ethernet socket located just right of the serial ports. 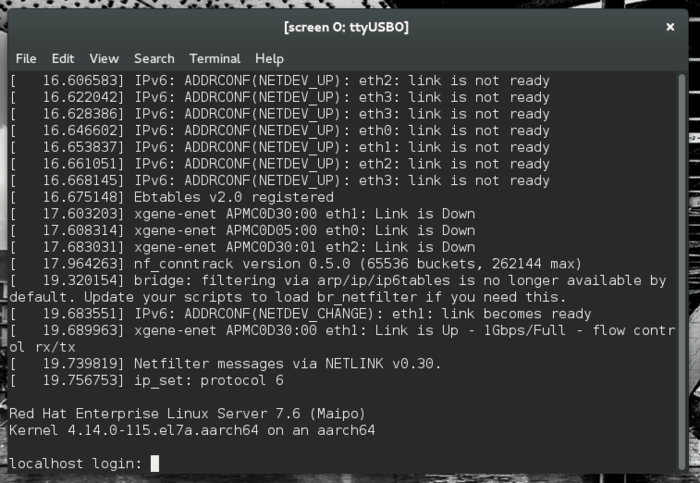 To support updates and package installs, we need to activate the RHEL subscription:

You will be prompted to authenticate with the customer portal as part of this process.

Now that we have a fully configured host, we proceed to replicate it for the other boards. We start using dd to copy the master image to a local disk, and then in turn imaging two more USB keys from the master image. On our laptop the first USB storage device is found at sdb, but this is likely to be different on your system:

We need to update the hostname to differentiate each device. We acccomplish this as follows after first boot. For example, we renamed the second board thusly: 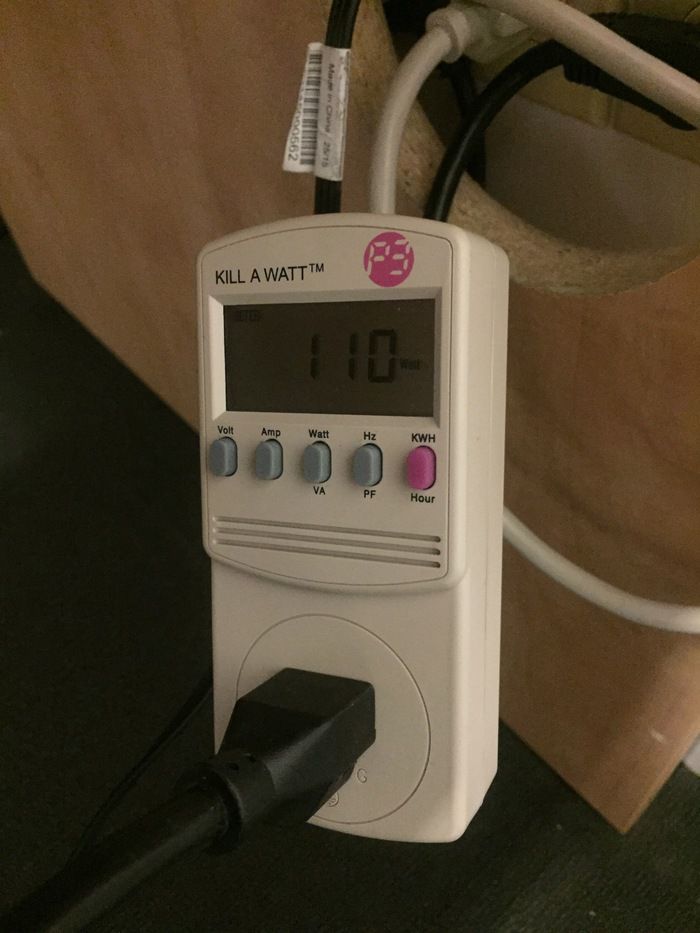 The authors wish to thank Edward Gasiorowski of Ampere Computing for his invaluable assistance and his knowledge of multiple generations of the X-Gene hardware.

There is an additional location to download RHEL 7.6 for ARM that may come in handy. Credit goes to Yan Fisher!

Maik Schmidt is our guide in the Pragmatic Bookshelf’s venture into the world of electronics. This is a compact work, like all others in the series, it goes straight to applicable examples and makes you get your hands dirty with real... Continue →